When conductor Jean-Pascal Hamelin talks about his work with the musicians of the West Island Youth Symphony Orchestra, there is energy and excitement in his voice.

“They are so talented,” Hamelin said. “I admire them so much. In this age of iPads and computers, they choose to spend their Sundays playing complex music.”

Hamelin had guest conducted with the orchestra in the past, but only came on board as its official conductor in September. He came to the job aware of their technical kills and was thankful for violinist Jean-Ai Seow’s strong coaching of the string section. It was his priority to move beyond the technical to tap into the emotion.

He is a conductor who loves to dig deep, both into the story behind the music and the emotion within the score. It’s a talent the critics have picked up on over the years. 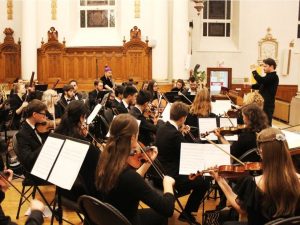 L’Acualité magazine described Hamelin’s approach to a score as “the genius of telling music like a thrilling story.”

“It’s very important for these young musicians to know what’s going on in the music,” Hamelin said. “Taking solo lessons is one thing. Playing with an orchestra requires the musician to listen to the other instruments and respond. To really understand the music. And they have to learn to link the instruments.”

Hamelin has conducted professional orchestras here and abroad. Working with a youth orchestra gives him something a little different.

“We might be working on something by Beethoven that they haven’t played before. A professional will have played the work hundreds of times and perhaps fall back on old habits,” he said. “There is a freshness to the (youth orchestra’s) playing which inspires me.”

The Choral Celebration program features music by Vivaldi, Bach, Fauré and Beethoven, as well as excerpts from Handel’s Messiah. d’Aragon will sing Handel as well as Vaughn-Williams’s Fantasia on Christmas Carols.

Hamelin looked for links between the works which would lend a continuity to the musical evening. He drew on interesting back stories, such as the fact that Handel was one of Beethoven’s idols. In fact, Beethoven preferred Handel’s work to that of Bach. And so Hamelin put Beethoven’s la consécration de la maison, ouverture, Op. 124 on the program because it is played in the style of Handel.

It’s all part of the fun and Hamelin is having fun.

“I am very happy with the way things are going, except we need more musicians,” Hamelin said. “We have 30 musicians right now — a very strong core for an orchestra — but we need more players.”

Hamelin trained as a conductor in Canada and Europe and has done multiple recordings. A recording of his work with an orchestra in the Edgar et ses fantômes musical theatre production received an ADISQ nomination for Classical Orchestra Music Album of the Year.

Trained as a pianist, Hamelin continues to give solo performances. Along with his work with the WIYSO and the CCVS, he is artistic director and conductor of the Orchestre Philharmonia Mundi de Montréal and the Choeur du Musée d’Art de Joliette.

Orchestra and choir perform at Paroisse Ste-Suzanne, 9501 Gouin Blvd., in Pierrefonds, Dec. 14 at 2:30 p.m. The Dec. 15 performance is at Église Ste-Rose de Lima, 300 Perrot Blvd., in Île-Perrot at 3 p.m. Tickets cost $25 for adults, $15 for students and seniors and $5 for children 12 years old and younger. For information and reservations, visit www.osjwi.qc.ca.